Pedws Ffowk lived in Wales in a time long before ours, before even our great-great grandfather’s time.

words in their ears to bring blessings upon the harvest.

Cockroaches crawled in cottages, mice scattered when doors were opened and women wore aprons over big skirts and had hair curled up in a bun or plaited like string.

Pedws Ffowk was such a woman, not old, not young and as yet without husband.

She lived in a grey stone village on a hill green as moss, went to church on Sunday, sang whilst she worked and knitted whilst gossiping with friends.

But during the spring just passed she had begun to sicken. She was ill in an inexplicable way, losing weight whilst eating very well.

She visited doctor after doctor with their pills and potions in green glass bottles but nothing did the trick.

And neither could the wise men and women of the hills with their charms and spells and promises of success cure her.

Until at last, close to death, she found a wise man who knew the cause of her ills.

Someone had put her into St Elian’s Cursing Well.

“I don’t mean literally me luv. Someone has been to see The Keeper the Well and had your name put on The Register and thrown a pebble into The Well with your initials scratched upon it.

“This is the surest way to curse someone and bring upon them illness, misfortune and even death!”

Pedws Ffowk hadn’t heard of this particular cursing well in the parish of Llanelian, Denbighshire, that’d turned her to skin and bones.

And she couldn’t believe anyone she knew would do such a thing. The wise man explained that unless the curse was removed she’d be dead before the next full moon.

She begged him to tell her how to remove the curse and in exchange for a few coins he told her what to do.

“You must go to The Keeper of the Well and ask her to take you out of The Well.”

Pedws Ffowk left the wise man’s cottage shaking all over and trying to remember the convoluted directions he’d given her.

“Take the left fork on the brow of the hill at the end of Keeper’s Lane then where the stream runs close to the bracken cross over, turn right at the old oak.

“Follow the valley to the tumbled down hay barn then take the path past the twisted hawthorn over the moor till you come to the shoe maker’s cottage.

“Bryn Jones is his name. Ask directions from him, if you’re in luck he’ll be there and he’ll be sure to give you further instructions…for a few coins.”

Pedws FFowk decided she’d better take all the coins she had hidden under the floor boards at home as she was probably going to need them!

Fortunately she was in luck and Bryn Jones the shoemaker was at home eating rabbit pie.

He obligingly gave her the directions to The Well which was just around the corner, though this fact cost Pedws FFowk three more silver coins.

Arriving out of breath and thin as a pin some while later at St Elian’s Well Pedws Ffowk saw an old lady with cracks upon her face like mountain crevices and a smell like sheep.

She was dressed in a black robe which dragged along the ground and had mud encrusted up to the knee.

Her hair was knotted as if she slept in a hedge, which in fact she did. Pedws Ffowk held her breath best she could and drew close to explain her predicament.

“That’ll be five silver coins please.” said The Keeper of the Well “If you want me to have a look in The Register to see if your name is written there.”

Five silver coins! Pedws was shocked. But as it was a matter of life and death she handed the coins over. She forced a smile.

The lady creaked her way over to a twisted tree by The Well and took down a tattered book wedged between two branches. She leafed slowly through it and Pedws saw several spiders run up her arm from the book and disappear into her hair.

And that was in fact the day she had first fallen ill on her way back from market with a fat chicken.

Pedws threw her arms in the air and begged The Keeper to remove the curse.

Alas, The Keeper demanded a further fifteen silver coins and cackled with her mouth open so wide Pedws noticed moss growing on her teeth.

“Fifteen silver coins! But that’s all I have in the world!”

Pedws Ffowk was beginning to feel she was being taken for a ride but knew better than say what she thought of these wise women. They knew how to curse alright.

So with a deep sigh she handed over the silver and The Keeper of The Well scratched her name from The Register. Then she put her hand deep in The Well and scooped out the pebble with PF scrawled upon it.

And it’s a fact that from that moment on Pedws Ffowk’s health improved, she almost skipped as she left the old lady in her damp abode.

She walked back home and with every step felt stronger, she ate and the weight stayed on, she fed the chickens and the goats and her muscles swelled like never before and she even knitted a whole shawl in a day.

And her barn was always full of hay and grain and her husband, for one fine spring day she got married, looked after their sheep as good as any shepherd could.

Though one thing did puzzled her for the rest of her life.

Who had put her in St Elian’s Well?

The story of St Elian’s Cursing Well in fact doesn’t end there.

In 1829 the Minister of the local Methodist Church, being a godly man concerned with the well being of his flock, decided to put an end to the trade in curses and had the well destroyed.

However a local man, John Evans or Jac Ffynnon Elian as he began to call himself as the new Keeper of the Well, diverted the miraculous waters to his own land and make a tidy sum he did with the steady flow of customers wishing to place a curse at the restored Well.

His reputation as Keeper of St Elian’s Well did however take a blow as he was taken to court and found guilty of charging people to remove curses that had not been cast in the first place and was imprisoned for a few months.

On his release he continued in business for several decades until the well was finally closed in 1850 and to this day remains inaccessible to the public.

In case you were thinking of paying a visit.

He works in the bristol area procuring bikes for those of limited means.

Your rage is ill-formed and unable

To fit into sentences which would enable

You to vent your hatred so instead it stews

Contorting muscles and distorting your view

As if myxomatosis had spread right through

The first time Dogman and I kissed was on an end of season seaside prom lit by blue and red lights many of which had long since packed in, a fact which Dogman observed with his acute eye and perceptive manner.

Those the worse for wear staggered homeward beneath circling seagulls, their screeches a reminder of their reptilian past whilst the sea played like a harp on the shingle as we strolled beneath the coloured bulbs, Dogman’s tail occasionally brushing my thigh.

It was a moment I’ll remember for the rest of my life as we accidentally ended up in each other’s arms avoiding discarded beer cans and chips on the cracked paving slabs. Before I knew it I was stroking his furry chin and tickling his ears to the sound honking horns and the jeers of youths bored on the bench by the park.

She’s a cleaner at the local branch of a nationwide estate agents. She’s seen countless staff come and go over the years and to her they are one mass of aftershave and perfume.
She brusquely dusts and mops, shoving feet out of the way with her hoover nozzle as she leans forward to pick up biscuit crumbs and crisps absentmindedly dropped. When they’ve gone home she makes a cuppa and rifles through their biscuit stash, dipping a handful of Shorties into her milky tea.
She knows she’s being filmed by the numerous CCTV cameras in the office and has a Devil-may-care attitude towards them, sprawling on the boss’s chair with her feet up on his desk, fantasising about zapping him up with her hoover.

She takes great pleasure whenever one of his biros zips up the hoover tube or some lipstick accidentally dropped on the floor by Amanda or Claire finds its way into her hoover bag.

Not that she’s nasty  in any way, but everyone has to have some level of job satisfaction.

Over 200 illustrations collected together in two books called Sing & Stuff!

I know for sure the finicky folk of Sing & Stuff would love to be given a home by you…they are a nosey lot tho & may cause a little mischief around the house, after all piskey is amongst the pages, the well known & notoriously naughty character from folk lore who still lurks beneath the stairs, in the darkest corner & in the garden shed…

You have been warn

Welcome to the world of artbysara…

...A place peopled by feisty, finicky folk from the realm of fairytale to the bloke down the road… Be warned though, these characters, if the like you, may follow you home or even end up snuggled up in bed with you… but don’t worry, it’s a love thing, and they do make a lovely cuppa. All words & images on this blog © Sara Jenkins. 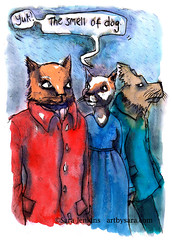 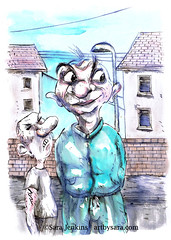 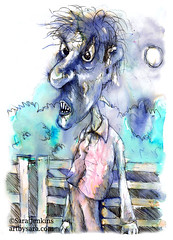 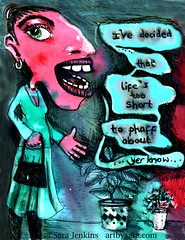 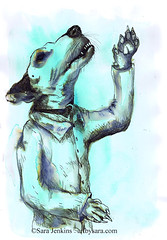 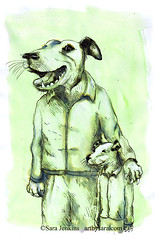 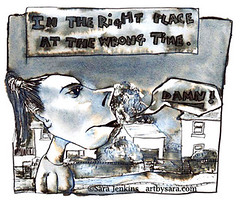 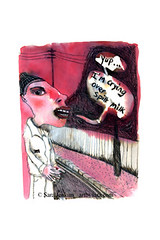 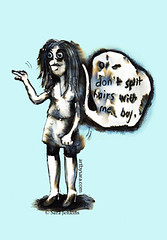